Stompin' at suicide: Songwriter turns to hockey to deliver message of love, life 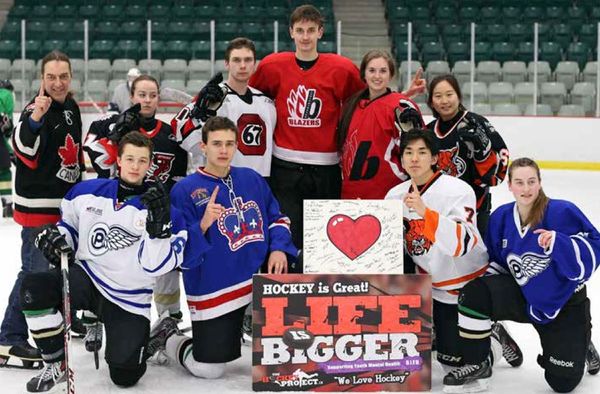 Hockey is Great! Life is bigger! That’s the message selected by a Canadian singer songwriter who knows the pain of suicide all too well, and who has turned to the game of hockey to spread a positive message to youths across the country and around the world. Larry Pegg released the music video Don’t Stop
Stompin’ this past month.

The piece is a unique hockey meets mental health video that pays tribute to Stompin’ Tom Connors and tips its hat to the Beatles, while sending out a message of never giving up on life.

Pegg remains a grieving father, having lost a daughter, Kelly, 20, to suicide in December 2007.

Larry said Kelly loved The Beatles and, although she never played organized hockey, loved to lace ‘em up and play shinny.

“We had a lake in our backyard, and we shovelled the ice off to become a community just by playing shinny,” said Pegg.

“We followed the NHL and Olympics and, as a family, gathered for the games.

“As long as a child has warm, comfortable skates, they can learn to skate.

“And the joy of skating is where the game of hockey begins.”

Larry said sport, in general, has been an expression of life for thousands of years. He said while Canadians enjoy many sports, hockey is the one game that truly brings people together.

“I see hockey as a uni form community around the world, he said. “The game splits ideological barriers and unifies people around one concept.

“I believe reaching kids should be mandatory and, if socialized sports is one way of doing that, so be it.”

Larry said Kelly always had a positive spirit, which made her death all the more shocking and stunning.

He said his daughter never suffered from alcohol abuse or drug problems.

“Kelly was a wonderful athlete and a typical child who played soccer and ultim ate Frisbee, and loved skating and playing shinny.

“I have a daughter who still lives, so I have to try to remain positive in the midst of this grief.

“I was with my songwriting partner, Edmund Eagan, when Stompin’ Tom died and I immediately came up with the line, don’t stop stompin.’

“Then we looked at whether we could celebrate the greatest hockey song ever written, and  turn  it  into  a metaphor on don’t give up on life, and the answer was yes.” Larry then came up with the concept of hockey is great, but life is better as a campaign to  bring  attention  to  mental health and suicide prevention through hockey.

His efforts fit in well with other campaigns with strong ties to the NHL.

Former NHLer Luke Richardson lost his daughter, Daron, 14, to suicide in Nov ember of 2010.
In 2011, the  Richard son family joined the Royal Ottawa Foundation for Mental Health, the Ottawa Senators and the Sens Foundation to launch fundraising efforts and take part in awareness cam paigns to try and inspire youth to talk about mental health.
Daron’s birthday, Feb. 8, is now known as Do It For Daron Purple Pledge Day, which asks people to wear purple (Daron’s favourite colour) in support of the Daron Richardson Fund.

NHLer Daniel Alfredsson has a sister with mental health problems,  which  prompted him to become an ambassador for the Royal Ottawa Hospital. Larry  said  efforts  like those began to make it clear to him that the hockey com munity really cares about the
issue.

He said that’s when he began to realize there was something bigger going on.

“We watch these kids win and lose on the ice and, while it’s no fun watching them lose, that’s part of life.

“But there’s no answer when you lose a child.

“The hockey community is one of passion, and I want to bring that down to the com munity level.

“That’s where I believe the concept of life is bigger has to grow from.”

Larry hopes the Hockey Project helps open new lines of communication for youth around the world.

He said the 80 kids who took part in the video all have a positive story to tell.

“They had a lot of fun, learned how to ice dance and took part in a music video.

“They even got marks for their participation.

“It’s a great story that gives me cause to be hopeful, even in the wake of what I experi enced in losing my child.

“When you lose a child to suicide, it sucks the life out of you and can cause hopeless ness to creep in.”

Editor’s note: Kaelan Collier of Rankin Inlet took part in the video, but was away at the Arctic Winter Games at the time of this story. Please see the April 2 edition for his thoughts on the project.